Collecting Child Support at the OJCC

Every year, the Florida Office of Judges of Compensation Claims submits a report regarding the state of Florida's adjudication system. This year's report is in the proofing stage and will be published close to November 30, 2016. The following is an excerpt from that report. 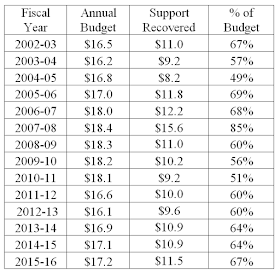 When the judges were given the responsibility for recovering these arrearages, no staff or budget was added to the OJCC to accomplish this task.

The volume of child support arrearages collected is particularly interesting when considered in light of the overall OJCC budget discussed below. Over the last fourteen (14) fiscal years, the OJCC has collected an average of 63% of its overall budget in past-due child support to the benefit and advantage of support recipients throughout Florida.

The comparison of child support recovery (red) and the OJCC overall budget (blue) is illustrated in this graph (in millions).

In 2012-13, the OJCC undertook the duties associated with reporting arrearage information to parties on behalf of the Department of Revenue (DOR). In 2013-14 the OJCC integrated the process of reporting Circuit Clerks’ arrearage information. This combination eliminated redundancy and waste across the process for all Florida workers’ compensation litigants. Litigants in Florida’s workers’ compensation adjudication system now get all of their required child support arrearage information from the OJCC instead of DOR and the Circuit Clerks. These most recent child support services on behalf of support recipients have likewise been delivered without any additional staff or funding for the OJCC operations.

Child support collections, and the efficiency of the OJCC system therefor is a source of pride for the judges, mediators and staff of this Office. It illustrates another manner in which this agency is effectively serving the people of Florida.

In a broader sense, the OJCC is an efficient litigation system. The OJCC budget, divided by the number of petitions for benefits (PFB) closed, reflects that the overall cost per PFB closed fluctuated in recent years, due in large part to the significant fluctuation in PFB closure rates. These figures demonstrate relevance when considered in comparison to filing fees in Florida’s Circuit Courts, which are as high as $400. The OJCC is demonstrably more efficient financially, with a per-petition cost well below the Circuit Court filing fees. Additionally, in the majority of instances, the OJCC cost is inclusive of mediation services, which generally are an additional cost to the parties in other civil litigation. Over the last fourteen fiscal years, the average cost per petition closed was $231.00, just above half the comparable Circuit Court filing fee.

Florida’s population has also grown markedly in the last twenty years. However, the number of judges has remained virtually static over the same period. These facts illustrate that the OJCC has been very effective at wisely managing the resources provided.

Petition for Benefit (PFB) closure rates have stabilized and closely follow the current filing rates. There is every reason to believe that trend will continue. A minimal volume of overdue PFB inventory may remain unaddressed in this litigation system, which appears from available data, to be in equilibrium. The resulting cost per PFB closed is therefore likely to increase in coming years if PFB filing volumes decrease.