It is March 2, 2017 and the Florida regular legislative session begins next Tuesday, March 7, 2017. It will run no later than May 5, 2017, The Florida constitution limits regular sessions of the legislation to 60 days. It is a busy time each spring. Though the session is only 60 days, members and staff have significant work to do throughout the year. Some therefore recognize Florida's as a "full time" legislature.

One bill of workers' compensation interest may be HB 7011. It does not amend Chapter 440, but it does refine delivery of medical care in some respects. It would allow "registered nurses who meet certain criteria to practice advanced or specialized nursing without physician supervision." And, for clarity in the growing paradigm of "telehealth," it "authorizes Florida-licensed health care professionals to use telehealth." It could be seen as encouraging and somewhat defining that tool. Telehealth has demonstrated value for those who have difficulty travelling, particularly in rural areas.

But, Florida waits to see what bills will be introduced that would specifically amend Chapter 440. One proposal was recently made by a Florida interest group, and was discussed at length in An Act Related to Workers' Compensation on Valentine's Day. Last December, there was another bill discussed in A Legislative Seismic Shift in Florida. At least as far as I can find, neither of those bills has yet been filed for the upcoming session.

There is discussion that other legislative proposals may come to light soon. I have been told that the Florida Justice Association has suggested legislative changes, but I have not seen a proposed or filed bill, nor any documents discussing or summarizing such a bill.

And, there are other discussions as well. This week, I received a memo discussing potential changes to the law. It was divided into various sections, each addressing a perceived concern with Chapter 440 and suggesting legislative action.

The first section is directed at the payment of attorney fees by injured workers. The stated goal to "conform statute to the holding of the Miles case." The proposed outcome would be for the employer and the employee to each "be responsible for their own attorney’s fees, except when a Judge of Compensation Claims (JCC) awards the injured worker an amount for their attorney’s fees pursuant to statute." This would involve changes to Section 440.105 and 440.34, Fla. Stat. There is discussion of requiring attorney fee contracts between employees and their attorneys to be filed with the Office of Judges of Compensation Claims. This would apparently be to make the contract provisions known, because though filing would be required, JCC approval of the contracts would not be.

The proposal would constrain employee attorney fees in other instances. There would apparently be a "statutory attorney fee" defined. But, a JCC might depart from that "statutory" fee to an hourly fee, but with constraints or parameters. There would be "express authority" for the JCC to depart from the "statutory" fee if "the JCC finds that the statutory attorney fee schedule produces an equivalent hourly rate" that is beyond particular deviations from the "fee customarily charged in the locality for similar legal services." There would be "factors" for deviation, perhaps "using the ones that were removed from this statute in 2003."

It is possible that this statute would address interpretations from appellate decisions. In a situation in which two experts testify regarding the appropriate hourly rate for fees, appellate courts have held that the JCC can select between the two rates expressed. In other words, expert one says the appropriate rate is $100 per hour and expert two says that it is $300. The Court has ruled that the JCC must select one of these two rates. But, in a curious logic, the Court has held that the JCC cannot select a rate in between the two. Awarding a rate of $200 in this example would be error. This latest discussion mentions eliminating this illogical outcome by providing discretion to "eliminate the current judicial restriction to select only from the amounts plead by a party."

There is discussion of placing a statutory "cap" on the hourly rate that an employer/carrier could be ordered to pay. This might be any particular rate selected by the legislature, some have suggested "$250 per hour." Whenever dollar figures are put into statute, there is concern that inflation of deflation might render such a figure illogical sometime in the future. To address that concern, the proposal would "create a statutory mechanism to annually adjust the $250 per hour, cap." The discussion is of tying that limit to the existing cap on the "statewide average weekly wage."

There is discussion of Westphal and Jones. Westphal was the Supreme Court's decision concluding that statutory caps on temporary total disability (TTD) benefits are unconstitutional. That was a decision that led to extensive discussion and prognostication. It's implications remain unclear in some respects, and some wish the Court had provided further analysis and explanation. The First District Court, later in 2016, rendered Jones, in which it concluded that temporary partial disability (TPD) constrictions were similarly unconstitutional.

The effect of the two is to strike the 104 week limitation and revive the prior provisions providing 260 week limitations. Neither decision provides clarity regarding whether that means 260 of each temporary benefit or a combined 260 weeks of any temporary benefit. Some lament the lack of clarity on this point from the courts, while others seemingly enjoy the resulting dysfunction and confusion.

This latest document proposes removing the (stricken) "104 week limitation" and replacing it with "a combined total of 260 weeks of temporary total disability (TTD) and temporary partial disability (TPD)." That would address the curiosity of the system left by the court. by design or not. This document also proposes a possible "26 additional weeks" of TTD" if the injured worker is not at maximum medical improvement (MMI) when the 260 expires. During that 26 weeks, MMI and impairment would be determined. Effectively, this would limit the combined temporary indemnity period to 286 weeks. Some would perhaps say that such a combination would leave a potential constitutional challenge, should some worker reach the (app.) 5.5 year limit without attaining maximum medical improvement. But, others would perhaps say that hypothetical potential bridge could be crossed later.

The document proposes that upon expiration of the "additional TTD" period, that "the JCC is required, upon motion, to determine the injured workers’ eligibility for permanent total disability benefits." It is apparently hoped that because this is "five and one half years into the claim" that most workers will have reached MMI by that time that this provision would be rarely engaged. It also discusses changing requirements for impairment income benefits so that an injured worker would receive them at the expiration of the 286 weeks even if overall MMI has not been reached.

The critics ignore that Florida's current ratemaking process does not mandate a single rate. The law does allow a single rate, and in practice the vast majority of insurance carriers use this single rate. That rate is determined by an entity acting as an "aggregator" (no, this is not a UF graduate interested in crops) of loss data. This entity compiles data and files a rate request with OIR. Based on that filing, OIR sets the resulting rate. The various carriers may adopt that rate. But, under Florida law, any carrier that wished to could make its own rate filing, rather than utilizing that resulting from the aggregator's filing. But, few if any carriers engage in that independent exercise each year.

The document reviewed today expresses a goal of increased competition in rates. It says a bill might "permit insurer discretion to depart from" the rate which OIR approves based on the aggregator filing. Carriers, without making an independent filing to justify rates, could perhaps deviate from that rate "by no more than five percent." Carriers would have to notify OIR of their departure, and OIR would be able to deny the departure "if it violates the ratemaking standards, imperils the financial condition of the insurer, or results in predatory pricing." Thus, there would be more flexibility and competition, but still government oversight.

The document discusses elimination of "cost drivers." This would afford employer/carriers more time to provide benefits without incurring attorney fee liability, from 30 to 60 days. It would appear that attorneys could still be compensated for their time in that 60 day period, but the injured worker and not the employer/carrier would pay. It discusses requiring reporting of defense attorney fees and changing the "reimbursement methodology for outpatient services provided by hospitals and ambulatory surgical centers." The new methodology would provide reimbursement based on averages of prevailing charges in some instances and based on billed charges in others.

There is discussion of medical authorization. The document proposes that employer/carriers would have to respond to medical care requests within a specific time, "3 business days, or 10 business days in certain circumstances." See A Victory (Whose") on One-Time Change.

Finally, the document expresses a need to "protect sensitive personal information of injured workers." This concern would be addressed by exempting certain information about the worker from "public records." It notes that a "similar provision was law from 1998 to 2003 and that provision automatically sunset during the workers’ compensation reforms of 2003." Reenacting this exemption is seen as protecting injured workers' identity, and perhaps as shielding them from solicitations from various service providers. Purportedly, such an exemption would again be subject to a similar "sunset" provision that would require future legislative action to readopt.

Whether this document portends legislative amendment this year or not remains to be seen. But, regardless of the ultimate outcome, the document provides interesting reading and may engender discussions and debates that contribute to understanding of the workers' compensation system. The many various proposals for change and the discussions are interesting.

What will the session hold for Florida's workers' compensation? It is a valid discussion. Quoting the great Mr. Spicoli, from Fast Times at Ridgemont High, I provide my grand prediction for 2017 "I don't know." 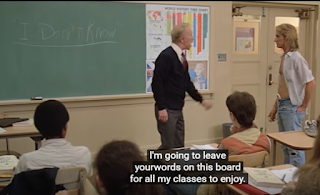 Posted by Judge Langham at 5:13 AM